I've received a tremendous amount of support - and flak - for putting up this site. One of the main arguments I've been getting against this site is essentially: "Who else is going to coach this team? What other coach out there could possibly handle these guys better than Coach Karl?" This exact question was posed to me by Mike and Sandy on AM 950 The Fan's Sports Guys morning show on Monday, and I had my answer ready.

To show all of you in Nuggets Nation that I'm not just an angry, complaining fan, but that I am, in fact, a solutions-oriented guy, I present you the Denver Nuggets Coaching Candidates for 2008. I will try to make this as brief as possible, giving just a few pros and cons for each candidate. At the bottom of this post, I will give my endorsement and elaborate on that particular candidate... 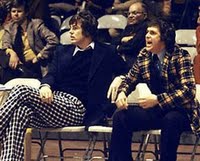 -Coached the Nuggets to the ABA Finals in 1975 and 1976.
-Coached Allen Iverson for six years, including a 2001 NBA Finals run.
-The only coach not named Pat Riley, Chuck Daly, Phil Jackson, Rudy Tomjanovich or Gregg Popovich to win an NBA title in the past 20 years.
Cons...
-He might have a bigger ego than the players (combined).
-Had a terrible relationship with Carmelo Anthony during the 2004 Olympic Games.
-He's very good friends with Coach Karl, and probably wouldn't accept the job if Karl is fired. 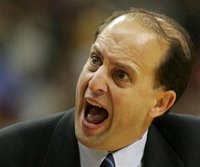 JEFF VAN GUNDY
Pros...
-A no-nonsense guy who preaches defense first.
-Is willing to tackle the opposing team's center if necessary.
-If things don't pan out, at least he'll still be collecting "Perfect Strangers" residuals.
Cons...
-While he's coached an NBA Finals, he's never won one.
-Wasn't able to get Yao Ming and Tracy McGrady out of the first round.
-I'd hate to lose him as a broadcaster. Who else is going to make fun of (former Nugget) Mark Jackson during NBA on ESPN/ABC broadcasts?

RICK CARLISLE
Pros...
-He's coached Ron Artest and Stephen Jackson - at the same time! So he's basically seen it all.
-A superb X's and O's tactician. Often gets credited for formulating the game plans that led Larry Bird's Pacers to the Finals in 2000.
-After watching him repeatedly on ESPN's NBA Fastbreak, I'm more and more impressed with his basketball acumen. Of course, hiring coaches based on their solid TV presence isn't always advisable (see: Rivers, Doc and Collins, Doug).
Cons...
-Has never coached in the Western Conference.
-Without NBA Finals credibility, players may not take him seriously.
-Who am I kidding? I really just put him in here because my friend Jaime from Richmond and other Celtics-fan friends always insist I include Carlisle (or Scott Wedman) when I write these things.

ALEX ENGLISH
Pros...
-Nuggets' all-time best player, and was an intelligent, classy, quiet leader during his tenure here.
-Has been logging time as an assistant coach for the Toronto Raptors, Atlanta Hawks and Philadelphia 76ers (come to think of it, that might be a "con" actually).
-Could be the right guy to mentor Carmelo Anthony as no one played the small forward position in Denver better than English.
Cons...
-Former Nuggets players haven't exactly panned out as coaches. Just ask Dan Issel, Bill Hanzlik and Mike Evans.
-English's poetry books would likely go on sale again at the stadium.
-Might attempt to show footage of "Amazing Grace and Chuck" to get the team inspired (and yes, I've seen that movie. It's not just bad, it's holy-shit-is-this-bad).

ROCKY
Pros...
-Has extensive knowledge of the inner workings of the Nuggets organization.
-Loved by players, fans and refs alike. Feared by opponents.
-Will keep asses in the seats even if the team's record isn't particularly good.
Cons...
-Doesn't speak.
-Has been known to run afoul of the law over the years.
-Might add the over-the-back-halfcourt-shot to the Nuggets' playbook.
My endorsement...

For those who listened to me on the radio on Monday, this won't be a surprise. I'm endorsing Larry Brown. Why? Below I will list and respond to all of the arguments against Larry Brown that I know will come up...
Q: "Didn't Larry Brown and Allen Iverson HATE each other in Philadelphia?"
A: Yes. They hated each other kind of like John Elway and Dan Reeves hated each other on their way to three Super Bowl appearances. And yet at Elway's Hall of Fame induction, he profusely thanked Reeves, and didn't even mention his own wife once!
The point is, even though Brown and A.I. had a publicly rocky relationship in Philadelphia several years ago, they a) produced some serious wins there and, b) have since expressed unbelievable admiration for one another, to the point that Iverson has called him "the best coach in the world." If you don't believe me, watch Iverson's 2006 interview with Stephen A. Smith on YouTube. At the 11:45 mark, after Stephen A. shows Brown speaking highly of Iverson, Iverson breaks into tears and then speaks about Coach Brown like a proud son. Moreover, by all accounts Brown and A.I. got along fine during the 2004 Olympics. It was another Nugget who had problems with Brown...
Q: "Didn't Larry Brown and Carmelo Anthony HATE each other during the 2004 Summer Olympics?"
A: Another yes! But that was four years ago, and since then Carmelo has proven that under the right coach and guidance, he can be the ultimate team guy. Just ask Jim Boeheim and Mike Krzyzewski. This is just a gut feeling, but I think Brown has had his humble pie, too, after the New York Knicks debacle...
Q: "Did you see Larry Brown coach the Knicks?"
A: Isiah Thomas was involved. End of story. Period.
Q: "Doesn't Larry Brown piss off everyone he coaches, and everyone he works for? What would Joe Dumars have to say about him right now?"
A: Why don't you ask Dumars how many NBA Finals the Pistons have been in since Larry Brown left? And then thank him endlessly for drafting Darko Milicic because lord knows Kiki would have!
Q: "Does Larry Brown even want to coach anymore?"
A: Yes. Larry Brown is so desperate to coach, that he lobbied through back channels to coach the Charlotte Bobcats this year. Unfortunately for Brown, the Bobcats prefer their coaches to be in the $500,000-$750,000 per year range.
Q: "Aren't Larry Brown and George Karl good friends dating back to their North Carolina days?"
A: Yes.
Q: "Then if they're such good friends, why would Larry Brown take his good friend's job?"
A: He wouldn't. Here's where we're going to need some planning and cooperation from all the parties involved. As the Rocky Mountain News' Dave Krieger pointed out today (just read Karl's quotes - he talks like he's a fan, not the coach!), Karl is losing this team and management is going to pin it all on him if we don't make the playoffs or get past the first round.
Here's the plan: Karl should resign, kick himself upstairs to a cushy "basketball relations" job like what Bernie Bickerstaff has in Charlotte (yes, Bernie Bickerstaff is still gainfully employed, I'm as shocked as you are), and bring in his good friend Larry Brown to take over. Keep Doug Moe as one assistant, and bring in Alex English as the other. Maybe swap English for Adrian Dantley - it would mark the first time in NBA history that two assistant coaches got traded for each other.
Brown, with the assistance of Moe and English, employs a defense-first, up-tempo offensive scheme utilizing Iverson as the do-it-all go-to guy, and team leader (a la Fat Lever in the 1980s). When the rest of the team sees their natural leader/warrior Iverson buying into the coach's system and don't whatever it takes to get that elusive ring, the others will follow. Furthermore, I assume Brown is smart enough never to let Anthony Carter or Yakhouba Diawara shoot a three-pointer again.
The bottom line is this: when you have a team of extremely talented players with big egos and enormous paychecks, you need a coach who's already been to the promised land to guide them there. They just won't listen to anybody else. I know this isn't as simple as it sounds, but this plan can work if you believe in it!
Vote Brown/Moe in 2008!!